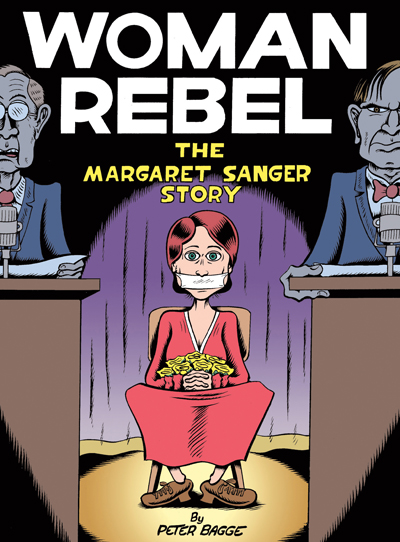 Join Peter Bagge this Saturday, Nov. 2nd from 5-6pm to celebrate the release of his new graphic novel, Woman Rebel: The Margaret Sanger Story. Peter will be signing books here at Floating World before heading to the Alberta Rose Theater later that night for a live recording of Live Wire! for OPB.

Cartoonist Peter Bagge is famous for his slacker character Buddy Bradley and more recently for his contributions to the libertarian magazine Reason. Margaret Sanger was a noted nineteenth century birth control activist, as well as an educator, a nurse, a mother, and a founder of Planned Parenthood. The Woman Rebel by Peter Bagge would seem to be an improbable pairing in content and in form, but Sanger’s life takes on a whole new vivacity as Bagge creates an adoring, fast-paced biography of this trailblazing woman whose legacy is still incredibly relevant and inspiring.

Drawn in full color with an extensive bibliography and introduction by journalist Tom Spurgeon of the Comics Reporter, The Woman Rebel showcases Bagge’s signature cartoony, rubbery style and potent sense of humor, as well as his respect for the precedent-setting political and social maverick. In a style jam-packed with fact and fun, Bagge charts Sanger’s life, from her impoverished childhood in rural New York to her brief formal education, from her work in the Lower East Side tenements to her involvement with the burgeoning birth control movement. Bagge has created the most accessible Margaret Sanger biography ever; The Woman Rebel is perfect for introducing this vanguard of the women’s rights movement to a whole new generation of readers.