The beginning of 2010 is a perfect time to start a new addiction: get hooked on KOMIKAZE, the disturbed yet hysterical Croatia-based comics network, featuring comics artists from the Balkans as well as artists from all around the world who are brought together by the same urge to explore morbid, non-conformist, brutal, absurd, and subconcious territories. Komikaze is moving in independent, non-profit circles far away from globalized and institutionalized art.

Started as a slap in the face to the sleepy Croatian comics scene, Komikaze has spread contagiously all around Europe and beyond using different techniques of dissemination, namely web presentation, exhibitions, comic-workshops/social-bonding-rituals, zine and magazine distribution, street art, and performances. Komikaze has been a regular guest at festivals like Angouleme in France and Crack Fest in Rome.

Little crumbs from the manifesto:

“KOMIKAZE” is a gang of crooks which disturb and provoke the public with their appearance… Our wish is to pluck out the glass eyes of the habit and by our own example show how everybody can see well with thir own eyes. ////Since our aims are brutal and bizarre, we have directed our knife points towards the field of artistic expression in order to save the innocent… …Our actions are various. The act of exhibiting itself is not crucial for a medium in which the reproduction is equal to the original. Today photography, a good photocopy, digital copy and print, speak equally strongly as the original….The point of the story is that everyone is the courier of an important message if they follow their inner wild eye. By this I want to say that the stress is on the process of viewing, not the exhibited objects…
My vision of the future is a constant circulation of comics on the Internet, and they will be printed and pasted inside or outside, according to anybody’s needs. In the woods, too, if desired. These will be the real culture factories, an old idea in a new package. It is just a question of time when everyone will realize that to spill ink on paper is an act of freedom.

BIO INFORMATION ( other authors on www.komikaze.hr ):

Main editor and organizator of Komikaze, and comics author. Graduated from the University of Fine Arts in Zagreb, Croatia. She’s the founder and coordinator of Komikaze, starting 2002 through this method: The primary idea of the project being a regional network of comics author that involves internet and print publishing, comic-workshops and multimedia happenings. In 2005 she published a comic book Gloria Scott’s Adventures, based on short stories by Mima Simic.

Born 1974, graduated as a painter from Zagreb, active as a comics artist as well as a poster artist for which he became famous in 90s, while doing posters for the two biggest music venues in Zagreb, Croatia.
http://gigposters.com/designer/10000_Igor_Hofbauer.html

Dunja was born in 1980 on an island in Croatia. Graduated from the Fine Arts Academy in Zagreb, Croatia, and the School of Visual Arts in New York. Published a couple of comic albums and zines by the name of Ego. Likes to switch gender roles between playing drums and sewing. Lives in Portland, Oregon.
http://tripica.blogspot.com/
http://www.tripica.org/

Born in 1981 in Upsala, Sweden. Since 2003 she lives and works in Ljubljana, Slovenia, from where she leaves all the time. Slavic language student, lives off of school loans. Active as an organizator, activist and designer in AKC Metelkova cultural center in Ljubljana. Writes and thinks through a feministic filter. Draws comic with Komikaze. Curious multipracticing honest Lutheran immigrant.
http://gigposters.com/designer/104144_Anna_Ehrlemark.html

Born in 1977. Finished painting at the Academy of Fine Arts in Zagreb, Croatia. Half of the year he spends on the island Hvar, and half in Zagreb. Draws comics since he was a kid.
http://www.komikaze.hr/index.php?issue=22&author=vanco%20rebac&action=showPages

Born 25. 10. 1973. Graduated from the Fine Art Academy and Art History on the Faculty of Philosophy in Zagreb, Croatia. Area of work: comics, illustration
http://irenajukicpranjic.blogspot.com/

Works on comics and illustrations for which he received awards. Graduated from the Faculty of Economics. He’s a founder of a non-formal Croatian avant garde comic collective Emisija Emocija.
http://damirsteinfl.blogspot.com/

Cult Serbian comics author from Vrsac, Serbia. The man who thinks comics saved his life when he was little. Collaborates with many artists: Nabor Devolac, Grabowski, Sasa Mihajlovic, to name a few. His zine Krpelj has run for more than 350 issues. When he’s not drawing he’s filming lo-fi movies. He persuaded his whole family to draw comics.
http://www.komikaze.hr/index.php?issue=22&author=wostok&action=showPages

Born in Canada, Nina moved to Yugoslavia as a child, where she lived till she was 12. She returned to Toronto right before the Yugoslavian crisis started, and lives there today where she draws comics , paints, illustrates and sculpts.
http://www.facebook.com/album.php?aid=80165&id=580863064

Born 1973 in Obrenovac. Finished painting at the University of Applied Art and
Design in Belgrade. Ex-professor at the university, later laid off for not showing up to work. Then a teacher at elementaray school, later laid off because of over tolerant attitude ( “All kids deserved A’s”). Member of multimedia team Kosmoplovci. http://www.komikaze.hr/index.php?issue=21&author=aleksandar%20opacic&action=showPages

Lives in Belgrade. Draws comics, illustrations and designs. She graduated from the University of Design in Belgrade. She publishes comics and illustrations in various magazines and has received many awards. She likes to draw cats but rabbits are also one of her favorites.
http://www.majaveselinovic.com/

Author of comics and comic scenarios from Brighton, who started and took part in many zines, magazines, and comic anthologies that are in print and published on the web as well.
http://www.soundofdrowning.com/

French drawer from Paris. Together with his brother he publishes for Le Dernier Cri under name Guedin Brothers. Guedin not being their real name, read from behind it spells dingue, meaning ”crazy.”
http://dnotamy.free.fr/

Hyperactive graffitty artist from Belgium who publishes in diverse magazines and anthologies since 1995.
http://k8pr3l35.blogspot.com/ 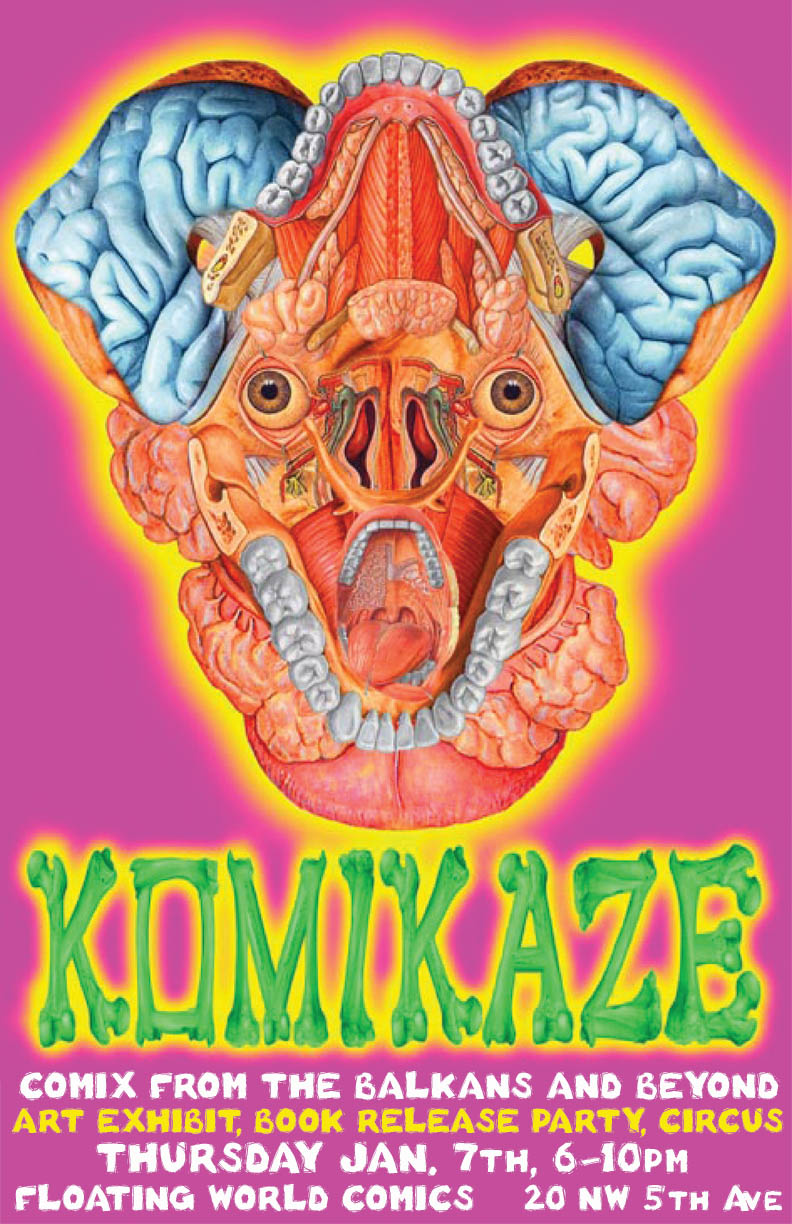