KRAMERS ERGOT is the definitive compendium of what’s new and exciting in comics today. Not to be confused with an “art” book, KRAMERS wants to be known as a comic, ha ha funny stories and pictures. Editor Sammy Harkham has made names like Sammy Harkham, Paper Rad, Mat Brinkman, Marc Bell, Souther Salazar, and now Bald Eagles and Suiho Tagawa “household” names. In some houses. Ever since KRAMERS 4, the cover has been a big deal, and I like how they print the artist submissions that didn’t make the cover. It’s interesting to see what could have been.

Short tangent here, thinking about alternate covers done wrong. What comics needs now is a rehash of the terrible marketing ploys of the 90’s: alternate covers and holographic paper. I don’t want to see a hologram of spiderman oscillating over a chimney though. I imagine publishing a comic with so many layers of information in each sentence and image that it can only be printed on holographic sheets of technology. This “gimmick” has not been exploited properly yet. Although I’m surprised Grant Morrison hasn’t done it yet.

KRAMERS has become a self referential beast. An event. More than once the artists inside refer to the fact that they’re in a KRAMERS. KRAMERS is a creation that has become self aware of its impact and influence. Post-comics. Lynchian.

OUT TO BOMB by C.F. – I don’t really know. Has something to do with IT, I’m sure. Holy ghost. Matter becomes spirit and finds yourself surrounded by GHOSTS.

CROSS FADER by Dan Zettwoch – Dan’s schematic engineering comic style works perfectly for this behind the scenes look at the operation of a stage magician’s trick employed at a church haunted house. Stage magic is apparently just lights, mirrors, and clever. It’s like an interpretive dance of how your tv works. There should be a high school tech theater for aspiring magicians.

PASSING TIME: AN INCOMPLETE APPRECIATION OF MARC SMEETS by Chris Ware – At first Chris Ware’s work seems so untouchable. The craft seems almost inhuman or insane. But anytime you look at biographies or interviews, he’s always sharing the history of cartooning that inspired him. His art didn’t just come out of nowhere, he is continuing a tradition. That is forgotten or unknown to most, so it’s always a treat to see these forgotten masters. Aesthetically, the art is always beautiful, inviting, and appealing. Like Herge or Hayao Miyazaki or Where’s Waldo, does anyone not fall in love with these clean lines and color palettes?

TRAUMA VALLEY STRIPS by Jason Miles – Good editing. The book reads like a mixtape, interspersed with one page gags and artists given more than one story, switching styles imperceptibly on the fly, creating that chaotic flow. I really like Miles’ stream of consciousness panels, like a campfire story made by one person. I’d like to make a book like KRAMERS except it’s all made by one prolific person.

DIE HARD 2: EJECTOR SEAT CADENCE by Bald Eagles – Robocop sings karaoke in a Geof Darrow on DMT splash page by something you’ve never seen before, and all of a sudden you realize you’ve got your money’s worth regardless of what follows. What follows is xx pages of this shit! Like a Darrow spread or an old Simpsons joke that just goes on and on and on and on. Efficiently dismantles the cliche of how comics are normally written, in order for the artist to speak honestly and clearly in his own voice using whichever extreme devices he chooses. Sometimes the knowledge of “the way things are” is the only thing preventing you from being free to recreate and see in a new way.

KRAMERS ERGOT 9 “FUCK YOU” by Paper Rad – Kramer goes and asks Jerry for a sandwich. Unfortunately, the rye is moldy. Kramer starts tripping and his couch starts talking to him. He cuts the couch open and finds that it’s made of cds, but they’re all bands he’s never heard of. Why is it that weird stuff always happens while you’re on acid? And then you wonder, is this really weird, or is it just the acid?

FUTURE ANIMALS by Andrew Jeffrey Wright and Crystal Kovacs – Funny because it’s true. I mean, things are moving fast now. Kids know more about computers and Youtube than you do. Their kids are going to have quantum computers and genetic engineering. Once they invent a VCR that can record dreams, Youtube is really gonna blow up.

SALLY’S SURPRISE by Jerry Moriarty – You’ll like this one. A very young girl asks an old painter why he paints pictures of her. He says, “Because I want to 12 years old again but not as a boy this time. By making pictures of you and imagining what a girl would do when something happens.” She asks to see the pictures, and they are the most amazing things ever!

PUSHING by Chris Cilla – The strange secret life of cops. Perhaps this is what Mulholland Drive could have been like if it had continued.

DALTOKYO by Gary Panter – Awesome strip that Panter does for the Japanese magazine ‘Riddim’. I’ve never seen him render scenes like this. It looks tight and he does a little of everything very well.

My attention wanders over the next 70 or so pages of that KRAMERS chaos. Finally rests on a page that’s easy to read and immediately hilarious.

Untitled diary comics by Vanessa Davis – Wow. Her comic succeeds in every panel, it’s perfect. This is good material! She has the best stories. I mean it’s funny when it wants to be, but it’s also so honest and heartfelt and well done. I’m going to get her other book SPANIEL RAGE right now. 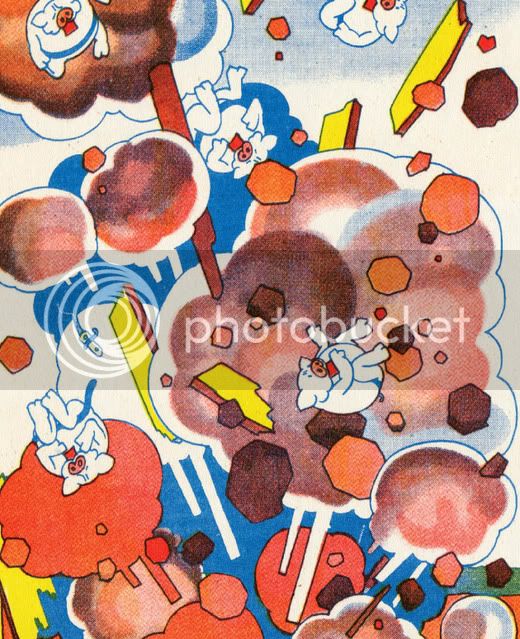 THE PORCELAIN FIGURINE by Shary Boyle – A variation of the rainbow vision. Traditional and pagan.

Most difficult of all, each new volume has to match expectations set by what has come before. This volume surprises and exceeds expectations more than once! Cheaper than a dozen disposable comics, and infinitely more durable – $34.95